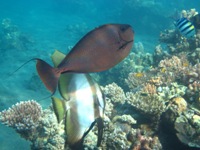 The coastal area in front of Mahangate is still largely unexplored. Confirmed reefs in the area are the Tip reef (17km), Zambia reef (16km), Rico-arme reef (13km) and the Coja reef (9km). The Zambia shoal is between 5 -26m deep and stretches more than 15km running parallel to the coastline about 4km off shore. All these reefs provide a diverse & productive eco-system for thousands of brightly coloured marine species. Varying in depth from 10 – 40m both hard and soft coral are flush with exotic fish, eels and dolphins. Shark, Mantas, whale sharks and rays are also common sightings.

The Africa Banks reef system was previously mostly inaccessible from the lodges further to the north and south of Mahangate. Now Mahangate will be the gateway to this magnificent reef and the oceanic diversity that it has to offer.

“Mahangate is certainly the gateway to the Africa Banks. The Africa Banks is in turn a phenomenal dive site with huge potential. The fact that we were able to see tiger sharks, whitetip reef sharks; scalloped hammerhead sharks; grey reef sharks; tawny nurse sharks and a whale shark in just four days of diving as well as many other species of ray and to cap it all the rare and elusive bowmouth guitar shark speaks volumes for my statement on the potential of this dive site.

The fish life was prolific and encouragingly all of the predatory resident reef fish were abundant and some of the largest specimens of individual species that I have seen anywhere. The herbivorous species were also abundant but they generally don’t suffer at the hands of fishing. My point being that the Africa Banks has not been affected by extractive use of any kind.

As for the corals and other reef life it was abundant and the sandstone base was well colonized. There were many places where you could spend a whole dive without moving and observe the coral and its community interacting. There are places here that will excite the coral fundi’s and macro specialists alike. All in all an exceptional destination with phenomenal animal and reef diversity that can cater for all qualifications, skill and interest levels.” (download full Reef Report)

The famous Bazaruto Archipelago is a mere 45km North of Mahangate. The bustling Estuary also provides the perfect spot for snorkeling for those who do not wish to venture out into the deep sea.

All Rights Reserved Mahangate Lodge 2022
We use cookies on our website to give you the most relevant experience by remembering your preferences and repeat visits. By clicking “Accept All”, you consent to the use of ALL the cookies. However, you may visit "Cookie Settings" to provide a controlled consent.
Cookie SettingsAccept All
Manage consent

This website uses cookies to improve your experience while you navigate through the website. Out of these, the cookies that are categorized as necessary are stored on your browser as they are essential for the working of basic functionalities of the website. We also use third-party cookies that help us analyze and understand how you use this website. These cookies will be stored in your browser only with your consent. You also have the option to opt-out of these cookies. But opting out of some of these cookies may affect your browsing experience.
Necessary Always Enabled
Necessary cookies are absolutely essential for the website to function properly. These cookies ensure basic functionalities and security features of the website, anonymously.
Functional
Functional cookies help to perform certain functionalities like sharing the content of the website on social media platforms, collect feedbacks, and other third-party features.
Performance
Performance cookies are used to understand and analyze the key performance indexes of the website which helps in delivering a better user experience for the visitors.
Analytics
Analytical cookies are used to understand how visitors interact with the website. These cookies help provide information on metrics the number of visitors, bounce rate, traffic source, etc.
Advertisement
Advertisement cookies are used to provide visitors with relevant ads and marketing campaigns. These cookies track visitors across websites and collect information to provide customized ads.
Others
Other uncategorized cookies are those that are being analyzed and have not been classified into a category as yet.
SAVE & ACCEPT